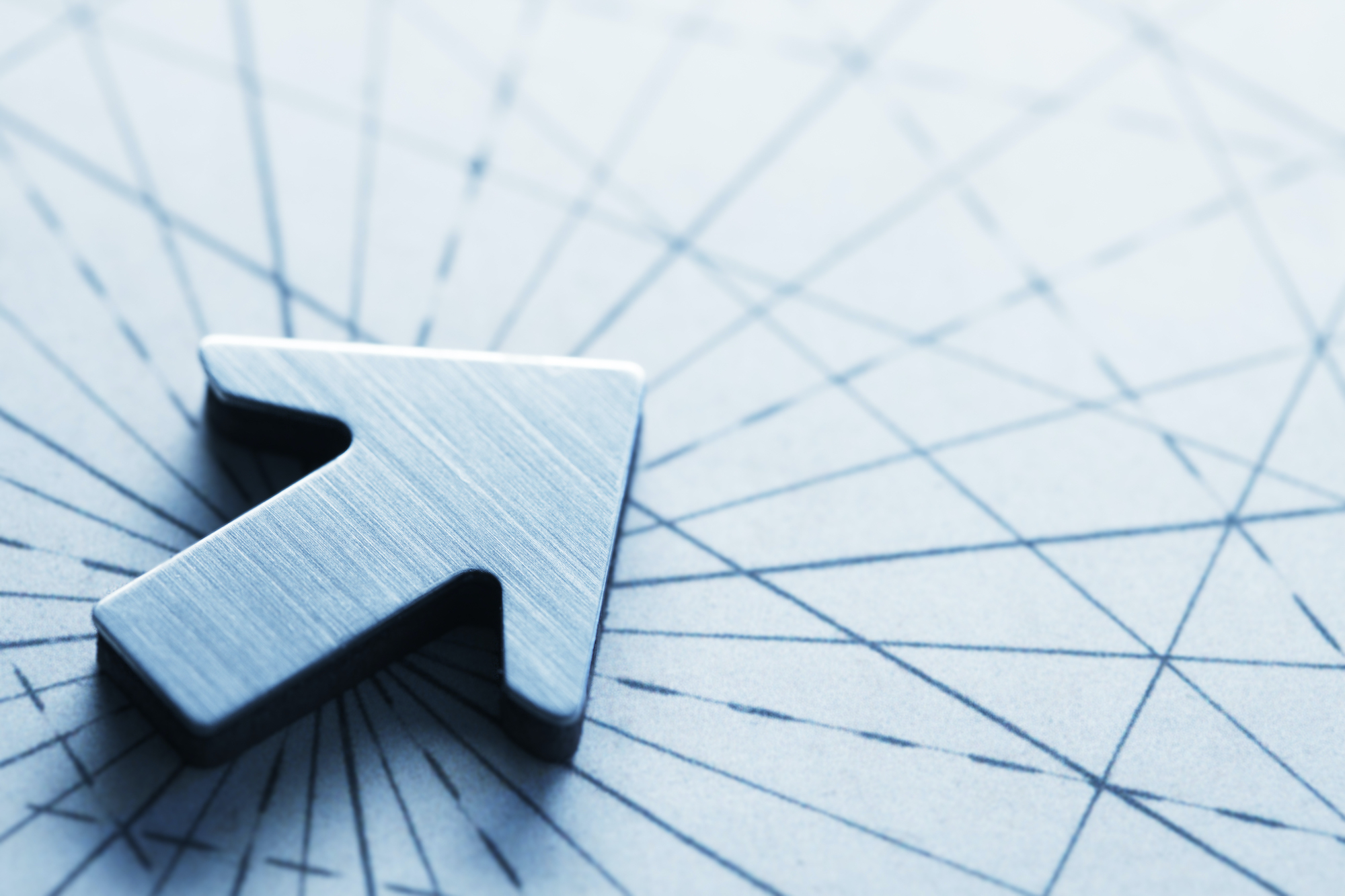 WHAT IS THE PROBLEM:

According to a 2021 Surgeon General’s Advisory,[i] there has been a recent increase in certain mental health symptoms among U.S. adolescents, including depressive symptoms and suicidal ideation. From 2009 to 2019, the proportion of high school students reporting persistent feelings of sadness or hopelessness increased by 40%, and the share of those seriously considering attempting suicide increased by 36%. An analysis of 2018 and 2019 data from the National Survey on Drug Use and Health (NSDUH) reveals a similar upward trend in depressive symptoms and suicidal ideation among adolescents in New Jersey.[ii] Rates of psychological distress among young people, including symptoms of anxiety, depression, and other mental health disorders have generally increased since the beginning of the COVID-19 pandemic.[iii]

Current US Preventive Services Task Force’s guidelines recommend universal screening for depression in adolescents ages 12-18.[iv] Research suggests that while nearly one in five school-age adolescents in the U.S. have a diagnosable psychiatric disorder, the majority of mental health problems are undetected and untreated, in part because adolescent depression screening rates remain extremely low.[v] Screening adolescents for major depressive disorder in primary care settings offers a potential venue for improving universal access to screening, but screening in this setting remains consistent with persistent inequalities by race, ethnicity, and region.[vi]

School-based depression screening may address a number of access-related barriers: they are less stigmatizing, provide an opportunity to target problems before they reach diagnostic criteria, and promote access to care for underserved populations such as minority youth.[vii] There is evidence that school-based screening programs can be effective in improving early detection and treatment of depression,[viii] but critical barriers remain.[ix] Many school administrators express concerns regarding the feasibility of obtaining parental consent for screening,[x] and available estimates show that about one-third of parents do not consent to depression screening.[xi]

We conducted a survey with a representative sample of 678 parents of adolescents ages 12-18 in New Jersey in March 2022.

We asked parents about (a) their degree of concern regarding their child’s risk for depression and suicide; (b) their degree of confidence to identify depression/suicidality symptoms and to seek help when symptoms are detected; (c) their beliefs regarding the potential benefits and potential undesirable outcomes of depression screening in school; (d) their specific concerns regarding administration of screening; and (e) how likely they are to consent for their child to be screened for depression in school. 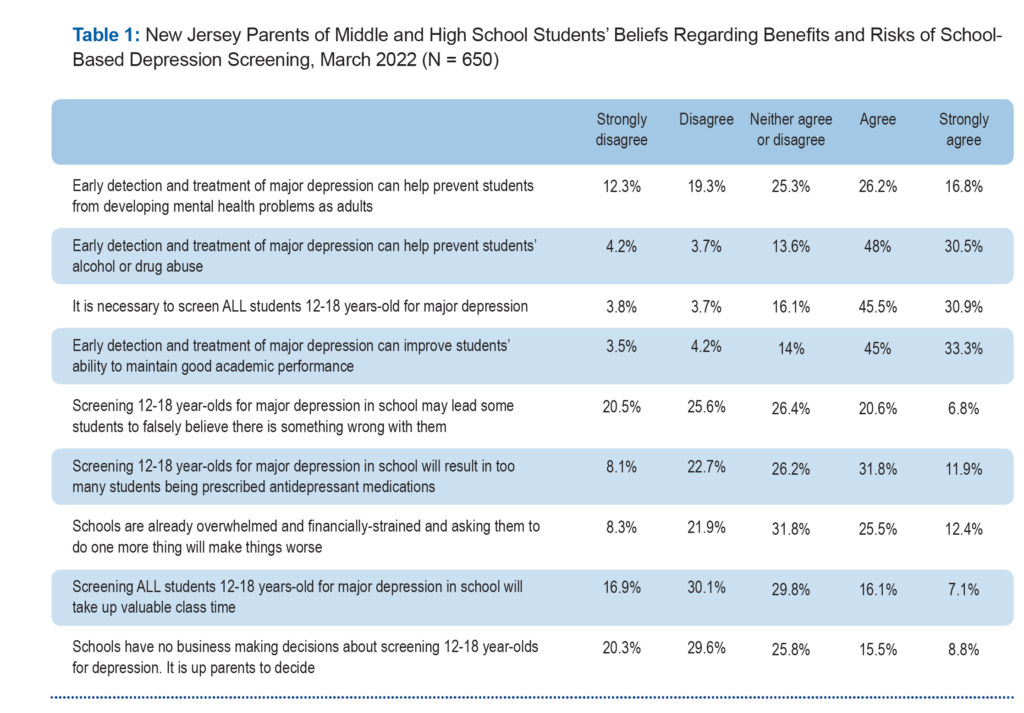 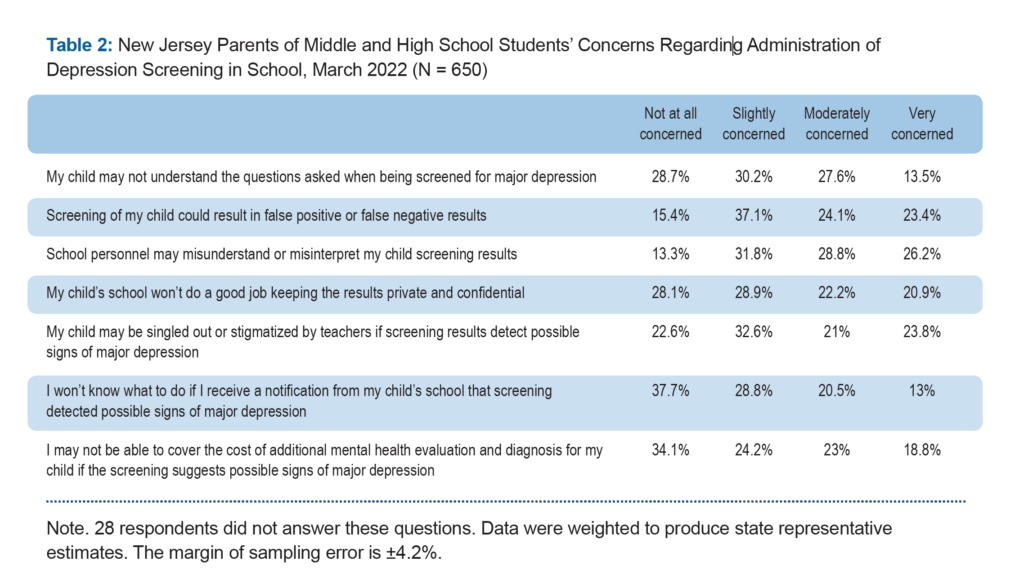 Table 3 compares the distribution of percentages of parents from different race/ethnicity group who said they are very or moderately concerned about each of the concerns listed in Table 2. The findings show that non-White parents were significantly more likely than White parents to express concerns regarding the ability of their child to understand the screening questions, the possibility of false positive or negative results, misinterpretation of screening results by school personnel, privacy and confidentiality of results, and potential stigma. Non-White parents, and Hispanic parents in particular, were also disproportionally concerned about not knowing how to follow up on a notification of a positive result and their ability to afford additional mental health evaluation and diagnosis if screening suggests their child may need one. 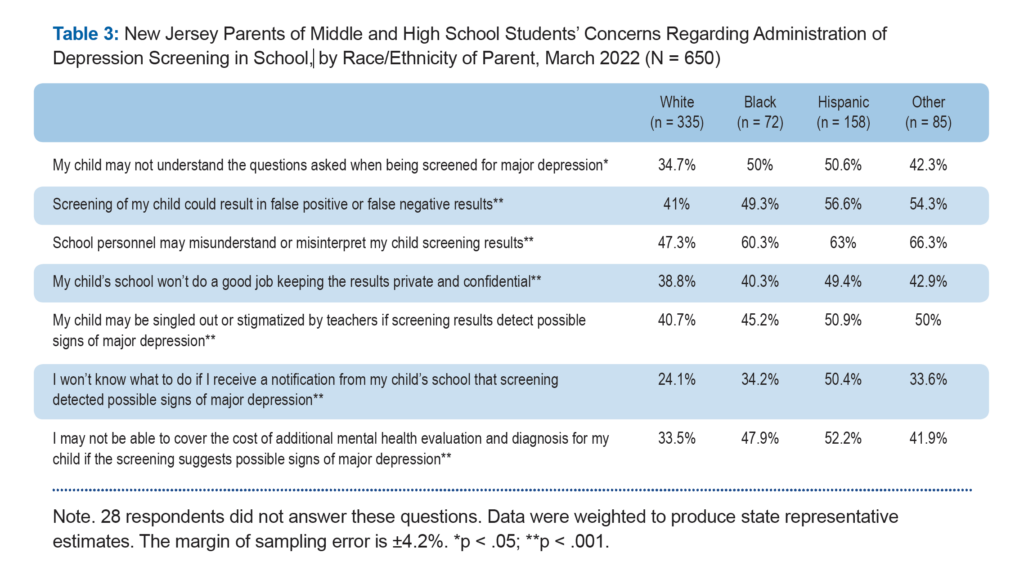 The great majority of parents in the state (over 75%) recognize the value of depression screening in preventing adolescents from developing serious mental health issue, drug and alcohol abuse, and poor academic performance. A majority (76.4%) also agree or strongly agree that it is necessary to screen all students ages 12-18 for major depression. However, between 25%-45% of all parents perceive potentially undesirable outcomes of screening including leading some students to believe that something is wrong with them, too many students being prescribed antidepressant medications, increasing the financial burden on schools, and taking up valuable class time.

Close to half of all parents are very or moderately concerned about the administration of screening in school, specifically, that their child will not understand the questions used for screening, false positive or negative results, school personnel misinterpreting results, school not doing a good job keeping the results private and confidential, and their child being singled out or stigmatized by teachers. About one-third of parents expressed concern about not knowing what to do if they receive a notification from their child’s school about a positive screening result and about 42% said they are concerned about being able to afford the cost of additional evaluation and diagnosis. These concerns are particularly acute among Black and Hispanic parents and are consistent with the growing incidence of depression and suicide among Black, Hispanic, and Asian adolescents as well as with existing disparities in access to mental health services for these minority populations.

The statewide survey of New Jersey parents/guardians of adolescents aged 12 to 18 years (N = 678) was fielded by Rutgers University’s Eagleton Institute of Politics, Eagleton Center for Public Interest Polling (ECPIP) in March 2022. Respondents were recruited from a combination of probability-based and listed sample frames. The data were weighted to represent adult parents in New Jersey households who live with a child aged 12-18 who are in school. Weighting parameters were derived from 2019 American Community Survey PUMS data. The variables used in calibration were sex, education, race/ethnicity, and region. The margin of error for the total sample is ±4.2 percentage points. This means that in 95 out every 100 samples using the same methodology, estimated proportions based on the entire sample will be no more than 4.2 percentage points away from their true values in the population.